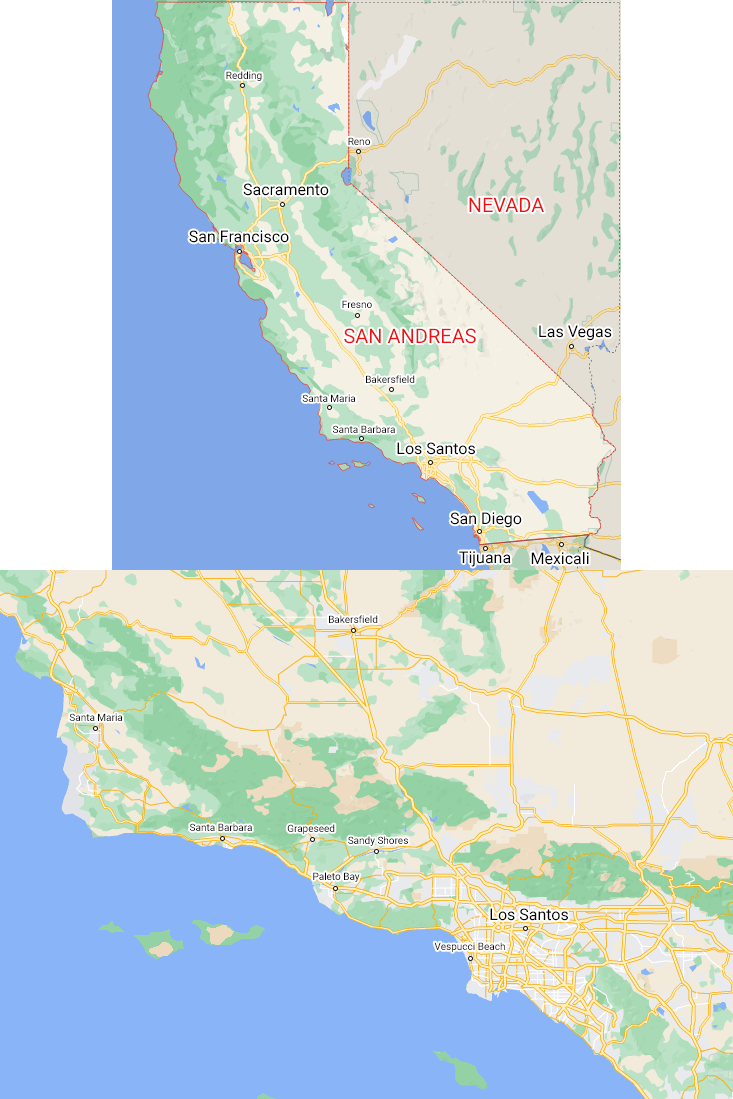 Los Santos, San Andreas, is a city based on Los Angeles, California. As a result of this, and LS-RP's stance on heavy-roleplay, Los Santos, San Andreas will act as a replacement for Los Angeles, California and part of its surrounding area. San Andreas will therefore replace California as the United States' 31st and second largest state. Encircled by states like Oregon to the north, Nevada and Arizona to the east, and Mexico's Baja California to the south, its coastline on the Pacific Ocean on the west acts as "the 5 borders of San Andreas." For a more immersive experience and in the interest of server continuity, we are only roleplaying on-map locations as replacements for real life locations, therefore San Francisco, Las Vegas, Miami, and New York all remain the same.

In addition to this, factions and players may use real events, history and backgrounds to construct both individual and faction background stories up until the cut-off point of 2019, granted that it doesn't coincide with key parts of our own server lore including key figures such as members of the government, police department, fire department and known criminals who also replace their real-life equivalents. This will apply for immersive purposes only to things like the weather, news (country-wide) and information to create a realistic character or faction background. In a nutshell, faction and character backgrounds may contain real-life history up until 2019 then everything after that must become fictitious.

Despite having a SoSan (SoCal) dominant stance on SA:MP, we have decided to step into GTA V with a more neutral stance on the subject to create even more opportunities for the players. Under this circumstance, we will be tailoring our map around different parts of California. Paleto Bay and Grapeseed will replicate specific areas and the cultures inspired by Northern California or as referenced, NorCal. Players who roleplay from here may take inspiration from areas like Bakersfield and Fresno where north/south lines converge. Both coasts have dissimilar cultures and this should be taken into consideration when roleplaying in or around either one.

Real life sports teams will be acknowledged with the replacement of LA for LS. For example, LS Rams replaces LA rams. LS Lakers replaces LA Lakers and the Los Santos Dodgers replaces the Los Angeles Dodgers. Because of this, players will have the ability to root for their native teams. Modded sportswear with the real-life equivalent names are allowed but when speaking, writing or wagering on your team, it must be substituted with its lore-friendly name. Everything from the fonts to colouring will remain the same. Additionally, you may also pluralize them as a compromise. Namely "the Rams," or "the Lakers" or "the Dodgers."

Real life clothing can be roleplayed in addition to what is made available by the script and modding team. However, if it is personal modifications, players and law enforcement personnel may describe and identify you based on what is noticeable and available to them. This applies to both clothing and body art, anything that substitutes something for something else. Additionally, the modded replacement must be listed in your character description e.g a MC-affiliated vest or "kutte" replacing a vanilla version of it. Anything that doesn't go without saying must be listed for immersive purposes.

Our weapon and ammunition portrayal will be dictated by script, where developers have worked tirelessly to implement a system based on San Andreas' real-life equivalent. Whatever they are named and modelled after is what they will be roleplayed as with no exceptions. Damage from weapon, ammunition and attachments will be taken into account when roleplaying injuries or declaring deaths in accordance to realism.

Vehicles remain in their original GTA V form and replace their real-life equivalents. To name a few of the more common vehicles, the Ubermacht replaces BMW, Obey replaces Audi, certain Benefactor models replace certain Mercedes models so on so fourth. An official guide will be posted in the correct section where players can draw inspiration from. Vehicles driven by players must suit their character's ambition, situation and financial circumstance and must make sense for their individual characters. For instance, if your character owns a variant of the Benefactor, it makes no sense to go on robberies or sprees in it, especially if registered to you.

A lot of GTA's branding and franchises are modelled around real life. For example, Tim Vapid is Tom Ford, Sebastian Dix is Christian Dior, Blagueurs is Balenciaga/Vetements, Anna Rex is Calvin Klein and Sand Castle is Stone Island. As a result, these brands will be considered "knock offs" and bootlegged versions of their real life equivalents unless there is no available substitute. If there is no available clothing to replicate their equivalent, it may be addressed via description so that players have the opportunity to examine and acknowledge it. Food chains such as Cluckin Bell, Taco Bomb and Hookies are all expelled, as are singleplayer and online-based bars, nightclubs and anything else that falls under this bracket. Anything that comes from single player, including factions, are disallowed.

Export
Back to top